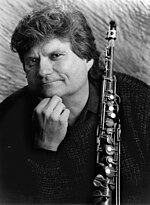 Tom was recognized in the middle 60's as an outstanding saxophone and flute player. He performed on saxophone with such jazz greats as Frank Rosolino, Bill Watrous, Arturo Sandoval, Jack Sheldon, Pete Christlieb and Louis Bellson.

After studying 20th century composition at Long Beach State, Tom’s interests turned towards jazz composition and arranging. In addition to motion picture and television assignments, the sought after composer/arranger has worked with many outstanding jazz artists and celebrities including long time commissions with Steve Allen (seven years) and Helen Reddy (five years). Among his television credits are arranging and conducting the CBS Jackie Gleason 30 year Reunion Special and The Bob Newhart 20 Year Anniversary show.

Tom's musical arrangements and those of Bob Florence, Roger Newman and Alan Broadbent were featured at the Kennedy Center in Washington DC in Portraits of Jazz. This presentation was penned by famed composer Cy Coleman and Academy Award winners, Alan and Marilyn Bergman, with whom Tom has worked for many years. In 1993, Tom conducted his arrangements with Jack Sheldon at Carnegie Hall in New York, also his Big Band performed his arrangements for two nights at the Orange County Performing Arts Center with the Pacific Symphony Orchestra.

Tom Kubis's musical arrangements define the contemporary big band sound and have been performed at virtually every major jazz festival in the world including the Playboy Jazz Festival, the Montreaux Jazz Festival and the Berkeley Jazz Festival to name a few. His charts have been played in just about any place or city that has a big band. There are literally hundreds of CDs available where Tom's arrangements can be heard from college to professional bands.

Tom’s playing, arranging and sequencing skills have taken him all over the world for concerts and clinics. As the Los Angeles Times puts it, "His charts are crisp and swinging are finely crafted with superbly linked written passages that flow with tremendous urgency and drive".

ALERT: We are noticing some orders are not receiving their new account confirmation.
Also, if your email does not match your paypal account. You may have to be unlocked.
If you need help? Feel free to email our tech support at info@surfwaremedia.com

New users will be required to validate their e-mail address prior to logging into the site.
You should receive an confirmation email. Be sure to double check your spam folder if you do not receive.

Dedicated to the big bands that play on Monday nights all over the country.
Monday Night Hang - ONLY $15
CHECK IT OUT

Sound Cloud Audio Previews are BACK!

Music Minus TOM
Video, Audio with and without the lead part.
Charts Included  $15
More Info